Real guns shoot real bullets and can cause real death.  The ownership and use of firearms is a right, but with it comes an inherent risk of danger.  As a responsible shooter we need to recognize that and take steps to prepare ourselves for when that risk of danger becomes a medical emergency.  A key element of any range bag should include a trauma kit.  I specifically use the phrase “trauma kit” instead of “first aid kit” as “first aid kit” generally implies a small kit with band-aids and 2×2 pieces of gauze along with other minor injury treatment supplies.  A trauma kit for a range bag should be focused around severe penetrating trauma such as…..you guessed it, a gunshot.  The greatest medical trauma research lab in history has taken place in the last 10 years in Iraq and Afghanistan.  We have learned an amazing amount on what works, what doesn’t, and what is really causing trauma victims (specifically gunshot wounds) to die.  The single highest killer is bleeding, which causes 60% of battlefield deaths.  This goes against the traditional “A.B.C.” approach of treatment where airway obstructions were always addressed prior to bleeding.  I’m not going to give a TC3 class here and explain the when, where, and how to use each in detail, but just try to give you the reader an idea of the important items to have.  Here are my recommendations for the trauma kit you should add to your range bag (which one can always modify as they see fit).

What is a pressure dressing?  It is simply a dressing that applies direct pressure to a wound without forcing you or anyone else to hold it in place.  The Israeli Bandage is a purpose built pressure dressing and another great creation from Israeli.  The dressing itself comes in two sizes (4in wide & 6in wide) and compared to the old field dressing issued to the Army, it is light-years in advancement.  The Israeli Bandage has an absorbent area that gets applied directly to the wound. Directly opposite on the outside of the bandage is a tensioning bar that the tail of the bandage routes through and wraps the opposite directions. When this 180 degree turn happens the pressure bar acts as a cam and drives additional pressure onto the wound to help stop the bleeding.  It’s fast and effective.  The American made version is referred to as the Emergency Bandage. 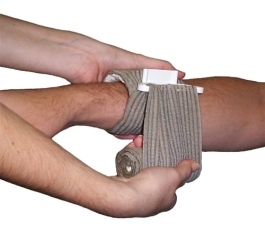 Depending on the entry and exit of a gunshot wound there is a pretty decent chance that a single pressure dressing won’t do the job.  If the wound has any type of deep and separating laceration the pressure dressing will not make direct contact with the bleeding tissue.  Imagine taking a scoop of ice cream right out of the middle of a tub.  When you put the lid

back on it won’t contact the lower portion where you took the scoop out.  The same goes for tissue damage.  In these circumstances we need to pack the wound with an absorbent material until filling it full enough that the pressure from a dressing pushes the packing material tightly against the bleeding tissue.  This is best accomplished with rolled gauze or z-folded gauze.  I use Kerlix or H&H Compress gauze.

Battlefield research has also dispelled many myths about tourniquets.  Research has found that they do not cause anywhere near the issues or problems previously assumed.  A quickly and correctly applied tourniquet without a doubt saves lives by reducing blood loss until the victim can get to higher level medical care.  JSOC approved commercial units are the CAT tourniquet (pictured) and the SOF-T tourniquet.

Both are well made, easy to use, and are vital for controlling any type or arterial bleeding or traumatic amputation.  These units run $23-$30 each.  If you’re buying one for $8-$12 on ebay, it belongs with your airsoft gun, not in a trauma kit.  Improvised tourniquets may get the job done, but they take longer to put on, generally do not work as well, and are more likely to cause tissue damage than commercial units.

A hemostatic agent utilizes a chemical reaction to cause rapid coagulation of blood.  The first major one was Quick Clot powder.  However, QC powder’s chemical reaction created extreme heat which essentially cauterized the veins and arteries, while giving

2nd degree burns to those rendering aid, and did not stay in contact with heavily bleeding tissue.  The QC powder also posed a severe risk if the powder came into contact with an individual’s eye.  Fortunately, the chemical composition of hemostatic agents has changed to mitigate this risk.  Now most hemostatic agents are impregnated into a gauze.  Quick Clot combat gauze is an example of this.  The key is that hemostatic agent must be in direct contact with the bleeding tissue, which means it may need to be packed in tight.  Hemostatic agents are designed to be used where a pressure dressing and tourniquet may not be applicable or work as well such as the armpit, or a major joint, but can also be used in lieu of standard roll gauze for wound packing.

AIRWAY obstructions is the 2nd leading cause of battlefield deaths followed by BREATHING complications.  Below are two important medical aids when dealing with airway and breathing issues.

The NPA is a simple device made from flexible tubing designed to be inserted through the nasal cavity and bypass the tongue.  The NPA is especially important to restoring an airway to someone suffering from severe facial trauma or disfigurement. As long as the structural support of the bone is intact, you can likely use an NPA.  There are circumstances in which an NPA is not appropriate which includes cranial fracture, but I’m not going to get into details here.

An occlusive dressing is specifically designed for a puncture wound to the lung cavity allowing air to enter the chest and collapse the lung.  Examples like the Asherman 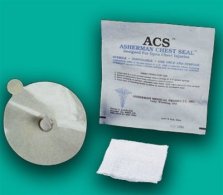 Chest Seal (ACS) are designed as a peel and stick to completely cover the wound with a 1 way valve.  This design allows the injured to push air out of the puncture hole when exhaling, but not sucking in air from the puncture wound when inhaling.  While there is some controversy regarding how well the valve works, it is still recommended to use on “sucking chest wounds”.

I know it sounds like I’m stating the obvious by including tape, but I wish I had a dollar for every time someone asked me for tape at the range for a hot spot on their finger or knuckle.  Tape is a utilitarian tool in the kit and along with holding some of the other bandages in place, it can be used to make improvised dressings.

A dedicated trauma shears is an invaluable asset.  They are built tough,

inexpensive, won’t poke your skin (blunt tip), and will cut through virtually any shirts, pants, coat, etc. to allow you to get to a wound.  Let alone those small odd jobs where a scissors is just handy to have.

Always remember that you may be working on someone that you don’t know.  Protect yourself from blood borne pathogens by having and using protective gloves.  Know that commonality of latex allergies, make a point to buy latex free gloves.

It is good practice to keep small first aid kits in the range bag, band-aids, gauze, a pack of Motrin or Tylenol, but make sure you also plan and prepare for what could happen in terms of trauma.  Just like using a knife or running a chainsaw, there is a risk of injury when using a firearm and that risk goes up if there are other shooters around.  Stocking a pouch with these items isn’t enough.  Take the time to get some training in Tactical Combat Casualty Care and know how to use the items you have.  The life you save may just be your own.